Ver ítem
JavaScript is disabled for your browser. Some features of this site may not work without it.

The following pages describe how a security system was designed for safety and health at work (SG-SST) for the company LIWO Vision Estrategica S.A.S; of In accordance with the organization and planning phases defined in Decree 1072 of 2015, the compliance with legal obligations in order to improve working conditions in LIWO Vision Strategic S.A.S is a priority, the legal guidelines in this matter allow the improvement of health and safety conditions, in order to improve the internal management an initial proposal was designed, which had to be reconsidered after made of the application of the initial evaluation for the SG-SST, the result was not expected initially, and for this reason it began with the development of the proposal of the basic elements of the organization and planning described in Decree 1072 of 2015 issued by the Ministry of the Work, as part of the design, instruments were developed to collect information, and documents that support the organization and planning of the management system, such as final result the critical elements to be developed were determined through a work plan defined, the development of the work plan allows generating the guidelines to give continuity to the present project, and that must be done because it is an applicable legal requirement and determined in the Decree 1072 of 2015. 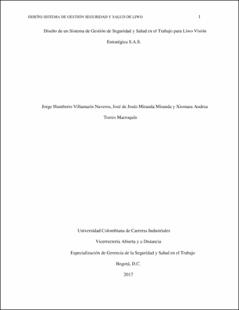