Ver ítem
JavaScript is disabled for your browser. Some features of this site may not work without it.

Analysis and proposal on TM information available for foreigners in Bogotá

The present project contains the analysis of the information published into the stations about the mass transport system in Bogota named Transmilenio, in order to identify an option which make easy for foreign visitors move in the city through it, and to propose an English informative media about how TM works. The importance of information in this second language, due to the continuous growth of international arrivals to El Dorado, which has as a consequence many foreign tourists who do not speak Spanish and are interested in know the local culture and representatives places. Getting into the subject, the principal subjects which support this research are: in first instance communication and signs, because is quite important to hand over a trusted source through an assertive message, using in the right way the signals; as the second one is the tourism, to identify the update situation of this field in the city; it is followed by strategies taken by Colombian government based on C.E.F. (Common European Framework), all of them focused in improve the level of English in Colombian people; and as the last are the precedents about how handle the information in different transport system around the world. Then, with the intention of obtain an info’s source in field, it was taken the qualitative research with descriptive method and it were used two analytic instruments: the survey, that helped to recognize which was the appropriate information about TM for tourists and their opinion about the system; the second was the observation to recognize the published into the stations and to categorize the recollected data. 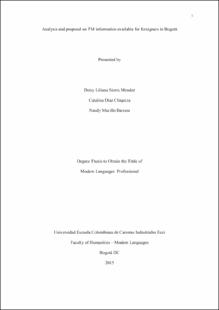