Colombia is one of the most important countries in South America, according to the location, history, agreements with different countries, and the most relevant reason: overcoming the stereotypes which have affected its image along the history. Besides, this negative image of the country has been promoted, because since many years, Colombia has faced inner conflicts, which became into the main focus of the national and international media. Also, this document describes how the media could impact the world displaying soap operas, series, TV shows related to drug traffic, violence and guerillas in Colombian culture, as a resource to promote a negative image of the country. Finally, this research identifies which stereotypes are cultural barriers in negotiations, but the world allows to Colombia shows the potential of its market with the aim of share its culture with the world. 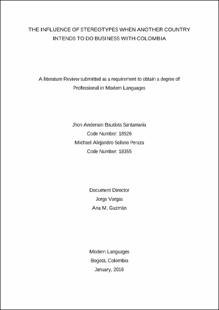