Interculturality at some Colombian universities

This is a research about Colombian cultural diversity of ethnic groups and Afro-descendants in some universities, through research to virtual documents, magazines and newspapers issued by government agencies and some of the public and private university in the country. The result of the data found reflect the different activities in the university student community in which multiculturalism is experienced, in addition to the benefits granted by the government and few universities for educational development and growth of these ethnic communities especially African descent, indigenous or foreign. Described what would be called some of the activities undertaken within the educational institutions to experience the culture, projects implemented by the Ministry Education and the importance that has come to generate the theme of multiculturalism and cultural experience, not only in the universities but also in society in general, everything beginning with education. 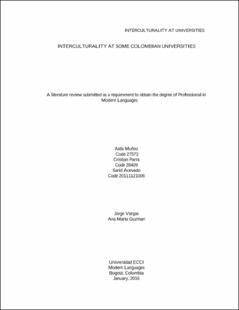