The present research work includes a proposal for the study of reliability or ATBF (Average time between failures) on a fleet of buses of the massive Capital S.A.S Company, that contributed in increasing the productivity of assets for this company. The project begins with a detailed presentation of the study of the problems of ATBF, reviewing the business environment to be able to design a plan of solutions to these problems in order to improve the operation, quality of service and road safety. The Project is focused in the study of assets Management, for thus to carry to out them plans of maintenance preventive and predictive in the company, to be able to determine the variable that affected directly the operation of the vehicles was necessary an analysis of fault at set times to establish what were the most common failures that were presented and in this way to act towards mitigation of them. According to the results of the study an of them failures more frequently identified was associated to them brakes, for this fault was implemented with the help of the RCM maintenance plans focused directly on the pneumatic system that feeds the brakes of vehicles. 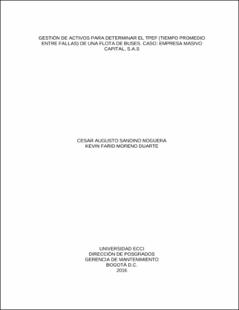