Fatigue is a work condition that usually occurs in cargo drivers and people who drive for more than eight (8) hours in a row, this is initially caused by accumulation of fatigue and repetitive activities that impede and restrict the natural movement of the body . In Colombia, there is currently little or no legislation regarding the working day for freight drivers, since it has not been given the importance it deserves, after all the accidents that have been registered. The Ministry of Traffic and Transport has adopted preventive measures in order to avoid further incidents. In many cases, traffic accidents could have been prevented by evaluating the accumulated fatigue that the driver has prior to the trip assignment. For the study, the sample consists of 80 loyal drivers of surveillance transport dispersed in three agencies located in the city of Bogotá. The main objective of the study is to determine the relationship that fatigue has with traffic accidents, establishing if it is directly proportional to the lack of maneuverability and uncontrolled vehicle travel. 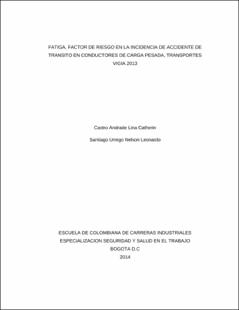