Currently the world is experiencing the moment of information technology, where ICTs play a fundamental role for the implementation of new forms of work, generating models to implement such as work outside the office or company, called telework, which It consists of an organized way of working, which occurs within the framework of an employment contract or dependent employment relationship, consisting of the performance of remunerated activities, using ICT information and communication technologies as a support, without requiring physical presence. of the worker. (Minwork, 2017) It is important that the company that intends to implement this modality, analyzes and studies its characteristics, since, although there are advantages for the employer, there are also disadvantages in relation to the control that it would normally have over its workers. The main objective of this work is to identify whether the regulations that regulate teleworking are sufficient in terms of the type of accidents that a teleworker may suffer in the course of their work, as well as determining whether the training offered by the ARL is sufficient. to avoid such accidents. In Colombia, for the implementation of telework in a company, the participation of the ARL is necessary, who finally, after a rigorous inspection, approve if the workplace at home is the ideal one for the fulfillment of the worker's tasks, added to liability against possible accidents that the teleworker may have. (GIRALDO, 2015) The contractual relationship that arises with teleworking, generates obligations and rights for each of the parties, which are employer, worker and arl, once the study of the positions that are workable within the entity is made, the company has free to implement this new way of working. The implementation of telework in a company can generate changes in the behavior of each of the workers, as well as in the groups or work teams, to that extent the relationship with employers is also affected, notably affecting ties, requiring a rigorous study on the variables that make up organizational behavior, important factors in the review of results for the company. (MORENO, 2014) 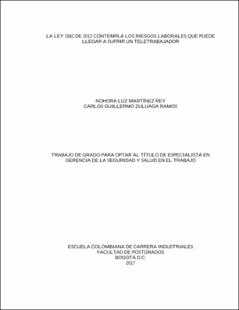