Sentence No. 25000-23-27-000-2001-90479-01 (AP) issued by the Council of State, as a strategy for the recovery of the Bogota River, orders CAR to carry out the POMCA update adopted by the Resolution-CAR 3194 of 2006 with a horizon of execution to 2019. The updating as it is named in order 4.8 of the operative part of the aforementioned decision, is based on the articulation of the Hydraulic Adaptation Project of the CAR, the Environmental Management Plan Of the Capital District, the Departmental Water Plan of Cundinamarca and the Regional Water Assessment of the basin. For the articulation of these instruments, through this study, a methodology was created, by means of which, it is possible to identify the orders embodied in the operative part of the sentence and that are binding on the POMCA, where it can be concluded that the Construction and Operation of the Canoas WWTP and the expansion of the WWTP El Salitre is a priority for the Council of State and according to the plans of the Government of Cundinamarca, the District and CAR; Since this project is in the programmatic components of the three instruments of environmental planning that order the sentence. The proposed methodology is based on characterizing the environmental planning instruments that names the judgment through the development of logical framework matrices and schemes, and to identify the contributions of these instruments to the current POMCA, the methodology is based on some recommendations Of the six phases for the formulation of POMCAS, which names the Technical Guide issued by MADS in 2014. However, the application of the methodology, focuses on the phases of preparation, diagnosis and formulation, according to the provisions of The order 4.8 of the sentence of second instance. As a result of the application of the proposed methodology, the articulation matrix is obtained, a tool for consultation and follow-up to the POMCA updating process that advances the RAC. It is noteworthy that the ERA is the instrument that generates greater inputs for the Diagnostic phase and in turn is the only one that does not generate contributions for the POMCA program component and that the plans that materialize the PGA and the PDA have not been updated By administrations of shift, both district and Departmental. On the other hand, according to the Judgment, the source of funding for the development of the programmatic component of the POMCA is the FOCOF and for its monitoring there are 5 axes whose purpose is to comply with the judgment. Concepts that can be articulated to follow the programmatic component of the POMCA, once it has been updated. 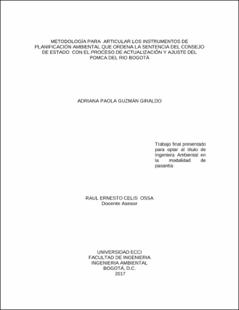