Assertive communication of foreign English speaking about the colombianism and popular idioms of Bogota.

Bogotá is known for being the most cosmopolitan capital, so that daily attracts a significant number of people not only in Latin America but in other countries, attracted by different reasons as its cultural and historical wealth, they come to city looking for new opportunities to work, study, fun and life Also, considering the importance of English as a language to business and cultural exchanges, the foreign population comes to city using this language primarily, from the US, UK, Australia or other places where speak English as a second language in the case of Japan, China, Germany, etc. Thus, the city has become a land of contrasts, among which are a large number of dialects, idioms and colloquialisms, like the product of a linguistic mix of different immigrant cultures in the country through the years. 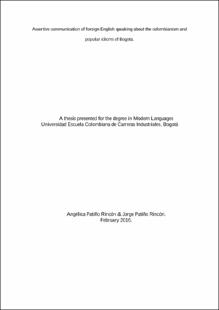