The text provides a comprehensive literature review regarding the main cultural stereotypes related to the Arab/ Muslim culture, and how these stereotypes affect the intercultural relations. Bearing in mind that these stereotypes appear in the text across aspects like: the role and life of the Muslim woman, the Yihad as a concept involves in terms of religion and terrorism, the attacks of 9/11, the representation of Hollywood of Arab/Muslims and the terrorist group ISIS. Once mentioned the stereotypes that affect the Arab/Muslim culture, the text tries to defend and debate the negative arguments around Arab world, taking into account the external perception (point of view of Occident) and the perception internal (interview realized to a practicing person of the Islam); showing that the lack of information and the exaggeration from the mass media, make that others believe in Arab/Muslim culture as an example of fanaticism and terrorism. 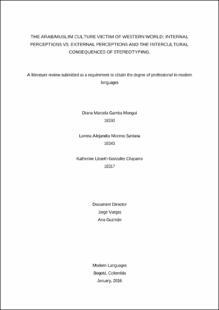