Quality education: the path to success critical discourse analysis of professional training on modern languages at ecci and its coherence with the objectives proposed by the “government of prosperity” in accordance with the national program of bilingualism.

Graduates of the Program Professional in Modern Languages from the Universidad ECCI expressed a slight dissatisfaction with the changes made to the curriculum during the course of their studies; as they feel that the preparation in English was not enough appropriate to enter to labor market with competitiveness. In order to respond to their concerns it was necessary to make a critical discourse analysis of the Government of Prosperity in relation to learn English in Colombia in accordance with the National Bilingual Program and compare it to the discourse of the ECCI from documentation on file in the Coordination of Modern Languages such that the common themes could be identified to further make clear the students' opinion about it, reflected in graduation projects at the technical curricula. Furthermore the results of English component on exams Saber Pro taken by students of the program were reviewed. Thus it became clear that changes in the program in recent years comply with the guidelines established by the Government and have resulted beneficial for students, since the results in the State Exam Saber Pro show a significant improvement compared with those presented by the first groups and evidence a better preparation of future professionals. 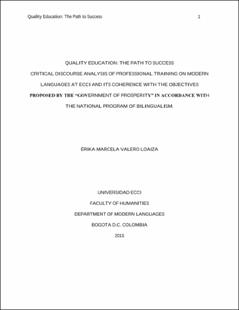