Since all this began in the world, and then came to the country, it was evident how it would impact society, even though it was not expected to be so forceful and even more so months, perhaps it was thought that this situation would be something temporary and that perhaps it would not have so much impact on daily life, on the economy, on labor, being the latter the focus of This research project aims to highlight the psychosocial risk generated by employment changes in middle class families due to covid-19 This situation that arose due to the arrival of covid-19 to the national territory, showed that the country was not prepared for an emergency of such magnitude, making it clear that not only state, also private entities, each and every one of the country's inhabitants, have had to get used to and accommodate certain situations and that are now part of everyday life. Being the labor section the one that has suffered a great impact, since many workers have certain situations of change, such as biosafety protocols, the teleworking and the performance of many tasks that today must be executed virtually, forcing their homes to become their new places of work, their meeting and coexistence, which has changed the daily routine of going out to work and meeting up again at the end of the day in order to rest. The confinement of these months has given rise to conditions, such as the psychosocial risk, which can trigger stress situations, generated by being forced to share the space, to be forced to make exits and this subjects them to a strong because of the fear it generates, since the mere fact of performing such basic and with biosecurity protocols generate stress and even feelings of panic and Nervousness about the fear of infecting the family. 10 It is therefore important to identify these individual psychosocial factors and that both impact on middle class families, which are a majority percentage of the population and therefore a group that is directly fragile in the face of the current situation. Translated with www.DeepL.com/Translator (free version) 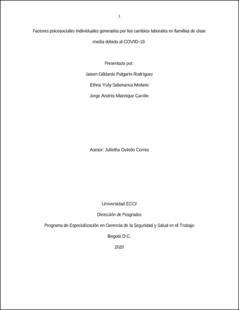